If you’ve ever been to the Sierra Nevadas in the winter — particularly Truckee — or even just heard of it, you know that it’s a region infamous for one thing in particular: snow. Lots of snow. As in, storms that last for days and dump dozens of feet of the white stuff.

But this year? Basically zilch… at least so far. January has become June-uary, as the typically frigid, snow-filled days of skiing and sledding are now instead the mild, clear, even sunny days of riding and running.

Our way of life in this small mountain town has essentially been turned upside down. There’s no Nordic skiing to be found, and the downhill resorts rely on their snow-making capabilities to keep the slopes functioning and occupied. In an ‘ordinary’ year, we’d be taking face shots of powder on the alpine slopes and logging dozens of kilometers on fresh, pristine Nordic tracks. We’d have completed several twistedly ‘painful but pleasurable’ Nordic races, pushing our limits further, and getting stronger, with each sound of the start gun.

I would have made my transition from skinny-wheeled bike to skinny skis, and gotten past the initial awkward phase of lacking coordination and balance, and heaving at the tops of the hills from inefficiency. I would just be getting into my skiing ‘groove,’ and getting more and more fired up to get out there, go hard and see what I can do. As a coach, I’d be pumping with adrenaline from the days of watching as the kids made the transformation of their own into skiing form, and began to shine brightly on the race course, finding a whole new level of digging deep.

Normally, I’d have fully embraced the spirit of winter’s lazy days, cozying up by the fire, drinking hot chocolate, and baking up a storm. I’d be dressed in my warmest sweaters, down coats and hats, and Levi’s paws would be worn from the cold days of backcountry skiing. My shoveling and car scraping skills would be nearly perfected, and the muscles built up. My boots would be water-stained and wearing down from trudging through the elements. Heck, we’d probably already be complaining about how sick of the snow we are.

I have never known anything else during winter months, in my whole life. Until now.

But as it stands, none of those things can be done. It’s hard to even really acknowledge that it’s winter, as there’s no snow on the ground, a bright sun in the sky, and no Nordic skiing to speak of. But, by the calendar, it is. And with the lack of cooperation on Mother Nature’s part to sync up with the date, as we’re used to Her doing, frustration and disappointment are high. Sorrow and despair have even come in to play. And complaining has been ever-present.

I realize the implications of the lack of snow are significant in my mountain town, where entire livelihoods depend on this one season, and the snow itself. It is a total bummer that our winter has been non-existent, and undoubtedly not without consequence. As a ski coach, I am blatantly aware of this. However, as an athlete, I have learned the importance of being able to adapt.

Having no control over nature or the weather, there is literally nothing we can do about our snowless situation. Yes, we can spend thousands of dollars turning thousands of gallons of water into artificial snow where we have the capacity, but the buck stops there. As such, I’ve convinced myself that there is really no sense in complaining. Sure, we can waste away the day being stressed and disappointed and considering ourselves unlucky about what we don’t have. Or, we can make the choice to make the most of what we do have, right now. I choose the latter.

So I’m not Nordic skiing as I normally would be. But there is plenty more to do; activities I can never say I’ve done before in January. In fact, in many ways, this winter is a blessing for me as a triathlete, and I really out to be soaking up this second lease on fall training. I’ve gotten in some amazing trail runs without having to seek out lower elevation, and probably gotten in more time on my mountain bike in the last few weeks than I did in the same time period at any point last fall. The riding has been incredible, and my legs are getting strong! Yes, there are a few icy patches here and there that you have to watch out for, but who cares? We’re mountain biking in January, in Tahoe!

Not what we’d normally expect or desire, but come on, it’s pretty darn sweet nonetheless. Who knows when we’ll get to say that again. It sounds like snow is on the way this week, and all will be ‘back to normal’ here, but I for one am going to take full advantage of these last few days of snowlessness, as I’m happy to have done so far this “winter.” And I’m going to be thankful that I’m already two months ahead of where I’d normally be in terms of my riding and running, despite being behind in my skiing. I’m going to be thankful that I’ve gotten in so many fun days on the trail with good friends, and been able to be outside, loving what I do, regardless of whether or not the calendar says I should be doing it. Life is never certain, and you won’t always get what you want, so you might as well make the most of what you’ve got. 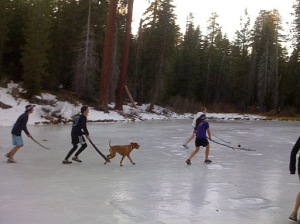 No snow and cold temps makes for fun ice escapades! 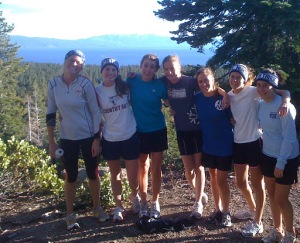 It also makes for beautiful trail runs. At the top of Lakeview with some of my girls.

And, of course, mountain biking. On the Flume trail in January — a definite first!