Christmas has come and gone, and it’s nearly 2013. I have to repeat that statement in my head a few times as I write it to really conceptualize the fact that it is actually true — especially because I didn’t turn on the Christmas carols three weeks ahead of time this year and have yet to go on a holiday cookie baking spree. (Just to clarify, though, I had an absolutely incredible holiday with very dear family and friends!) I may sound well beyond my 26 years here, but I can’t believe how fast time is going by… It has been more than two months since I competed at Worlds — that’s two months since my last triathlon; my last competition and the culmination of my season.

I miss triathlon season so much already. I miss the excitement of an upcoming event; the stimulation of the races; the simultaneous pain/pleasure of pushing beyond my limits; the road trips; the people; and even the 4 a.m. wake ups (it’s so worth it when you know what you have coming)! More than anything, I miss that overriding feeling of having a ‘greater purpose’ of sorts. During competition season, triathlon is on my mind virtually all the time. It’s at the forefront of my decisions and actions, and I feel constantly excited about it.

During the off-season, the objective is to take a bit of a break — both physically and mentally — from that sort of ‘all-consuming’ feeling; to let your body and mind wind down, focus a bit more on other aspects of life, and then progressively get the gears turning again in preparation for the season ahead. I’ll be honest: I’m not enjoying the off-season as much I probably should be. As soon as I got back from Worlds, it was an abrupt dive back into ‘reality.’ November

was an insanely busy month as I got more involved in one of my new jobs, and also began preparing for coaching to start up again for the winter season — in addition to my other three existing jobs. I became completely immersed in work in an all-consuming way, and triathlon season quickly came to seem like a distant memory. I told myself that it was actually supreme timing to be so unbelievably busy, as it was time for me to take a rest from training anyhow. It was a forced negligence of sorts, as too many other things were taking over.

After about three and a half weeks of a casual run or bike here-and-there a couple times a week, I knew it was time to progressively start getting things cranking again. This is always a gradual process, so patience is key. However, it is now near the end of December, and my “insanely busy” November has only escalated into an even more overwhelming December. That cliche chicken-with-its-head-cut-off analogy is fully applicable to my life right now.

Nonetheless, I’m ultimately still thinking about triathlon all the time, even if I’m not supposed to be. And in so many ways, I’m really longing for it to be at the forefront again. I know the off-season is a necessary step to future success… winding down, recovering and relaxing, and then building back up again to start anew — and hopefully ahead of where you had been. I totally understand and embrace that part, and am really excited about having some time to just focus on training and preparation without the stress of competition, and with a race schedule full of opportunity looming ahead. But I think where I am really having a hard time is that the many “other” aspects of my life are becoming so busy right now that I feel like the athlete part is taking a bigger backseat than it really should; that it’s getting shadowed. I am no doubt still an athlete, but it just doesn’t seem quite as present or as defining as I’d like it to right now. And that’s where I really miss the season, I suppose.

I know I’m actually still doing okay on the training front right now given the time of year, and that my crazy schedule is ultimately probably a blessing in disguise, as it’s forcing me to work my way back into a full training load as gradually as I probably should. But with that being said, I know I have a LOT of work to do in the coming months, and will undoubtedly need more time to do it. I have some really big goals for 2013, and need to make a lot of progress in order to get there. So, I’m working on some potential changes for this next year, which I hope to be able to share more about later (I still don’t even really know what these changes will be yet, but ultimately I am just on the hunt to make some minor adjustments so I don’t feel like it’s such a scramble for me to ‘find time’ for the thing I really love the most — again, working toward letting the ‘athlete’ piece of my life come back to the forefront).

Looking back on my 2012 season as a whole, I am so pleased with how far I have come. It was a year of progress in so many ways. I had some incredibly amazing highlights, and some very frustrating challenges; some absolutely wonderful experiences, and some less-than-fun experiences; days where I really ‘showed up,’ and days where my body just didn’t have it; great results that shocked me, and results that left me disappointed; goals that were achieved and even surpassed, and others that I simply could not reach. But through it all, I learned so very much, grew tremendously as an athlete and person, and came to love the sport of triathlon even more than I imagined I could have.

All in all, 2012 was an incredibly positive season for me. There were no real failures — partially because I don’t really believe in “failures,” and partially because I came out of every race (even the ones that presented the most challenges) having progressed as an athlete in one way or another — and never, ever gave up on myself. My body stayed healthy and strong, and my mind happy and positive, from early April to late October, with 15 races on the schedule. I did not accomplish all of my goals, but I accomplished many, and each time I went out there, I gave it my all, which is certainly satisfying in itself. I was able to push through the tough days, both in training and racing, and come out a stronger athlete on the other side. All said and done, I believe I am a whole different athlete than I was at this time last year, and I am so very grateful. 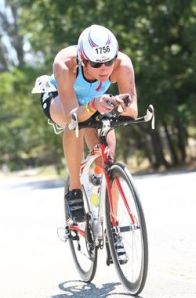 I believe this sense of progress can only mean good things for the future, as I look to make a similar — but even more substantial — ‘jump’ in 2013. I have some pretty massive goals for the year ahead, and I know the path to achieving them certainly is not made easier by the craziness of my life right now. But I have always been a firm believer in big dreams and the power of will. I may not have all the tools I need just yet, but I do believe I have a surplus of both of those things, as well as a whole lot of passion and heart. And I think that’s a good combination to get me started, while I work toward obtaining the rest.

I am working to finalize my 2013 schedule, goal sheet and plans for the new year, and I am excited to post more information about all of it soon! For now, as I transition from one incredible year and start looking ahead at building up for the next, I can’t help but be overwhelmed by my gratitude for an unbelievably fun season defined by progress — a critical step on a long road that I hope will continue to climb! I am so grateful for the many wonderful opportunities I have been afforded; the fantastic support I have received this year from my sponsors, family, friends, coaches, fellow competitors and athletes, race volunteers and my amazing community; the knowledge I have gained; and the growth I have made. To all of you who have supported me in pursuit of my dream this year, each in your own unique way, I cannot thank you enough, or tell you just how much your help means to me. And I promise to do all I can to make 2013 a year of even more progress, and of course lots of love… for triathlon, and for all of you.